Tokyo and my final days in Asia...

I’m coming to the end of my last full day in Asia.  I spent the day tackling the subway and train system here in Tokyo.  The task is not for the feint of heart.  Becky and I have mastered the New York City subway system, and when we did that, we were quite proud of ourselves.  Trying to master the Tokyo system is a little like trying to get your arms around brain surgery. 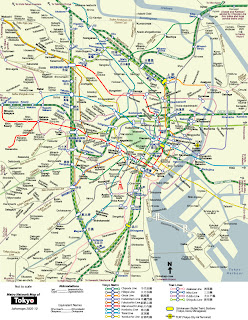 Each and every line in this picture represents a train or subway line.  There’s the Tokyo Metro System, and then there are a whole bunch of private company lines.  They’re all using the same tracks, and they share many of the same stations.

My intention was to get up early and head out to find a certain Harley Davidson store I was given the address for.  That trip required two transfers and moving from the Tokyo Metro onto another private train line.  BTW… did I mention that the stations and signage within them has very limited English available?  All of maps on the walls are in Japanese, and it’s only one printed brochure that gives you this information with some English on it.

So on my trip up to the HD store, I wound up getting some bad information and was sent in the wrong direction on one of the train lines.  I finally figured it out when I was almost halfway to the end of that current line I was on.  I got off that train, crossed over to the tracks heading in the opposite direction, and made my way back to my starting point.  Ultimately, I was only two stops away from my destination, but I had wound up going through at least 15 to get there.

When I finally got through with my HD store quest, I headed to an area of Tokyo called Asakusa.  It’s a bit older, and it has one of the earliest temples in the Tokyo area.  The temple dates back to 628.  I visited the temple itself as well as walked through the multiple shopping areas around the temple.

I found Tokyo to be a real unique place to visit.  At the risk of being cliché, it really is a place where east meets west, and old and new collide. As I traveled around, I saw plenty of people dressed in very traditional Kimono’s with slipper type shoes, as well as a large share of ultrachic young kids with spikey and dyed hair.  Respect and politeness still seem to be a major theme though for the country.  Everyone was extremely polite and respectful of everyone else.
Posted by mmacygin@gmail.com at Saturday, January 29, 2011