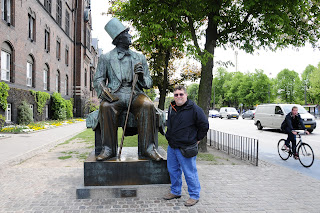 So the last time that I wrote, I was touring the Asian region.  Since then, I've been quiet on the blog front, but busy on the work front.  Things have been more than crazy at work with the implementation of a new e-mail application going on.  But on Friday May 6th, I hit the rode again for another Training Tour.
This time, my destination is Europe.  My itinerary had me starting in Frankfurt Germany, followed by a short stops in Arnhem Netherlands, then my current location of Copenhagen Denmark.  After here I'll be going to Warsaw Poland, Milan Italy, and finally London England.

My first weekend was spent in Frankfurt Germany.  While there Joe Sabatello (from UL as well) and I were invited to come to a local community event at a neighborhood Fire House.  It was an open house, and fund raiser for the fire house.  One of the Frankfurt UL IT guys, Frank Treml was performing at the event.  He and his partner have this two man band that does everything from cheesy 80's music, to Bavarian Beer Drinking music, and everything in between.  While there he kindly dedicated "New York, New York" by Frank Sinatra to Joe and I as being the two people who had come the farthest to the open house.

The day after the fire house gathering Joe and I did some shoe leather tourist sightseeing.  The one thing we learned is that the cost of taking Taxis in Europe is ridiculously expensive.  A 30 minute taxi ride on Saturday night cost us about $70 USD one way.  And as I go from Germany to the Netherlands to Denmark, the high pric of taxis continue.

On Monday evening, after a day of IT Meetings in the Frankfurt office, Frank Treml, along with Andreas Geil (Director of EULA IT Operations) hosted an evening of fun and frollicking at another local establishment.  Not entirely sure how to explain this place.  It has go carts, segways, an area with a beach motif, as well as a bar and a restaurant to boot.  It was by far one of the most enjoyable evenings I've ever had with work colleagues.  It's also the first time in my life I've had a steak cooked right next to me on the top of a super hot piece of granite.  It was a "rump" steak cooked on a "hot stone".

I left Frankfurt by car with a couple of UL IT guys. Frank Prossegger from our TTC (Plastic Testing Center) in Krefeld Germany, and Wouter Zeggelaar from our Arnhem Netherlands office.  Wouter was kind enough to volunteer to take me to Krefeld and then on to Arnhem.  Unfortunately I was in both places to short a time to get an opportunity to get out and do any sightseeing.  I've certainly made for that here in Copenhagen.

I left the Netherlands by plane out of the Amsterdam Airport.  It was a short 1.25 hour flight from Amsterdam to Copenhagen.  Having got here by about 6:30 PM local time, I was able to check into my hotel, and get back out onto the streets by 8:00 PM.  I was looking to get a "lay of the land" as well as a late dinner.

I came across an inner city amusement park called "Tivoli".  Interesting place.  Sort of a cross between Six Flags, Gurnee Mills, Grant Park/Ravinia, and I'm not sure what else.  There were lots of restaurants, shopping, crafts, and rides and carnival type side shows. You know, the hawker type places where you try to shoot arrows into a bail of hay for a cheap $0.50 prize that you wind up paying $5 in tickets for...  I found a great restaurant called Hercegovina that served a Croation and Dutch Buffet.  Great food.  After eating, and walking around some more, I was happy to find that the amusement park had open air concerts on Friday nights.  So I was able to hang out and catch some music as well.

Todays excursion was another shoe leather sightseeing tour.  I hit the streets around 10 AM, and I walked my way around the center of Copenhagen for the better part of the entire day.  I walked through the main shopping areas.  While taking a short coffee break, I was surprised to see that the more liberal attitudes of Copenhagen lent themselves to public displays of immodesty. My next tourist stop was at the Rosenborg Slot.  This is where the Kings and Queens of Denmark resided from 1577 through 1874.  What a phenomenal place that was.  Along with being able to tour the castle, I was also able to tour the "treasury".  This held "The Crown of the Absolute Monarchs" from 1671 through 1731.

Weather permitting, tomorrow I intend to huff it over to see the "Little Mermaid" and other points of interest that I missed today. (The weather turned sour, and it started raining on me around 5 or so.)